“I learned that I was tougher than I thought I was. I learned that I could just keep going and I guess I did not know I had that in me.” – Martha Stooks, Northumberland County. 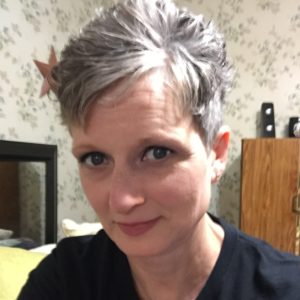 HOW WAS YOUR BREAST CANCER FOUND?

I had a mammogram on November 9, 2017 and got a letter saying there is no evidence of cancer. In mid-December I found a little lump on the top of my left breast about the size of a marble. I made an appointment with my family doctor who said it could be an infection in the milk ducts, so I didn’t think much of it. I took an antibiotic for ten days but the lump was still there, then I had a ten-day taper of prednisone. In mid-January I still had the lump so I was referred for another mammogram and an ultrasound; I had those tests on January 23rd. The gentleman doing the ultrasound told me I had very dense breasts and he couldn’t see anything. After the tests I just went about my business with all these people telling me nothing is there.

In April I went for a Pap test and they did a breast exam at the same time. The woman doing the breast exam referred me to the main Geisinger site after she said “Gee, there’s a lump here” and I said “I know!” She was the first person who acknowledged that something was there, and a biopsy was scheduled for the next day. That same woman called me on May 1st to tell me I had invasive lobular carcinoma stage 3. After that, it went fast: port, chemo, and bilateral mastectomy on November 15th. Almost a year to the day that I received a letter saying no cancer, I had both breasts removed.

WHO SUPPORTED OR HELPED YOU?

My husband Mark, whose mother passed away from breast cancer in 1997,  was a huge supporter. He told me I would not face the same tragedy that his mother had. My co-workers were also great. I never stopped working and only took off time for my mastectomy.

WHAT DID YOU LEARN ABOUT YOURSELF?

When I was feeling sorry for myself I knew that wasn’t good, but then again I had the right to feel sad. I learned that I was tougher than I thought I was and that I could just keep going. I guess I did not know I had that strength in me. I wanted to be tough for my daughter; I did not want her to be sad.

WHAT DO YOU HOPE OTHER WOMEN LEARN FROM YOU?

It’s your body and if you feel something is wrong, something is wrong. Keep going and be positive. I know it’s bad, I get it. My oncologist said “Martha, if I could bottle your positive attitude and give it to other patients I would.” I never felt like I would die from this, I thought, “I’m going to live my life and keep going.”

HOW DO YOU THINK A FRIEND OR FAMILY MEMBER CAN BEST HELP SOMEONE WHO HAS BREAST CANCER?

Just be there for them and be patient. I was agitated and angry at a lot of things, but never at God. Don’t treat her like a cancer patient, treat her like you normally would and offer support.

HOW DID YOU FIRST BECOME CONNECTED TO THE PBCC?

I saw a sign at Geisinger Medical Center and looked up the PBCC online. I signed up to order a free Friends Like Me care package. Reading the package contents really helped a lot. It was information I would not have otherwise.

WHAT DIFFERENCE DID THE PBCC MAKE TO YOU?

The PBCC answered many questions, including some I might not even think to ask. It can seem like you’re the only one feeling the way you do. There are emotions you never dreamed of going through. The package helped me know I was not alone in that.