Tell us about your breast cancer diagnosis…

I had ignored my health for several years.  I had not bothered to find a new doctor in Pennsylvania when I moved here in 1990.  A friend said if she made an appointment would I go to her doctor.  I agreed and in the meantime canceled the appointment because I was traveling throughout the country doing sales presentations.  As I traveled throughout the country, I found a lump which I swear was getting bigger in every city I visited.  I tried to reschedule my appointment but could not get another appointment for another month.  Once I visited the doctor, he could immediately get me into get a mammogram and see a surgeon in the same day.  Not a good sign!  The surgeon explained that he could do a “ surgical biopsy” and I could get the results right away or wait for the results with the non-surgical biopsy.  I chose the “surgical biopsy” which indeed said that I had breast cancer.  The nurse mentioned that young women don’t do as well as older women.  I was almost 45.

By some fortune, I was negotiating a contract with the attorney from Astra Zeneca who makes tamoxifen.  I thought it was interesting that they made a breast cancer drug and I was just diagnosed with breast cancer.  She was able to locate doctors for me in the Philadelphia area.  The doctor requested that I bring the original mammogram films to the office.  When I went to the hospital to pick up the films they said I could only have a copy of the films.  I was advised that “the copy was just as good as the original.”  Out of my mouth came “Great, then you keep the copy!”  And thus taking responsibility and being aggressive in my care was born. 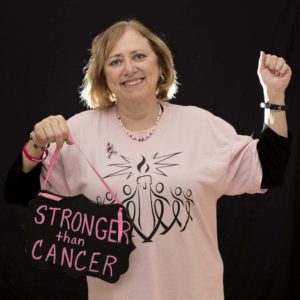 My visit with the surgical oncologist was wonderful!  Although the cancer had spread to my lymph nodes she was so positive and cognizant of my emotional needs that I felt empowered.

On July 17, 1998 I had a mastectomy.  I needed to be at the hospital at 6:30 a.m.  It was then at 6:15 a.m. I smoked my last cigarette.  The surgery included having a tissue expander put in because being a smoker, immediately having the trans flap reconstruction, might not have great results.  Indeed, a month after the surgery, the tissue expander needed to be removed.

I started chemo in August of 1998.   The first visit was the scariest and most emotional.  My oncologist was so very kind and reassuring.  Approaching this as a preventative step rather than a last ditch effort, helped my mindset.  I had 4 rounds of Adriamycin and Cytoxan and then, was told that there was a trial underway to add Taxotere and/or Taxol to compare results.  So just when I thought I was finished there was another 4 rounds of Taxotere every three weeks.

When I was finally finished with chemo, my surgical oncologist suggested I might consider radiation.  When I went for a consult, the young resident didn’t want to hear that I was just there for an opinion and was pushing me towards having radiation at his hospital which was “better than having radiation in the Poconos.”  I didn’t feel comfortable with the consult and went for a second opinion at Fox Chase where a whole panel discussed my case.  It was then that I learned that my initial surgical biopsy was actually a lumpectomy and the local hospital had only taken a few slides of my tumor.  The criteria for radiation was tumor size, location of the tumor and spread to more than 4 lymph nodes.  My only qualifier would be size of the tumor but I had to make a decision about whether or not to have radiation.  I decided not to have the radiation since I assumed that if you were only going to take a few slides, you would use the largest portion of the tumor.

How did you find strength while undergoing treatment?

I felt impowered in taking charge of my health.  My doctors were wonderful.  They offered emotional and physical support.  My family was supportive although the daily calls of “How are you” became annoying.

I really enjoyed having my treatment in Philadelphia.  I rewarded myself after each chemo treatment with a deli sandwich and shopping.  I tried to schedule appointments on Wednesday when the Philadelphia Art Museum had evening programs that featured, art, food and music with different themes.

I was finding, however, that now that I was finished with chemo, the scary part was to find the new normal.  It suddenly occurred to me that “I had cancer!”

I had reconstructive surgery in February, which I believe was too soon, after treatment ended.  I was still feeling down and joined a support group in February 1999.  I felt at home.  I met so many people who became my best friends and we could talk about things that our family just could not understand or didn’t want to hear or that we didn’t want to share.  After years in the software business, I was starting to use my social work degree and became the facilitator of the support group.  I started lecturing on breast cancer, became involved with the American Cancer Society, joined Rotary and then in October 1999 attended my first Keystone Conference of the Pennsylvania Breast Cancer Coalition.

Such positive energy!  The ladies in the support group were ready to do our first 67 Women in 67 Counties Photo Exhibit.  Working with the women of the PBCC was amazing.  They were dedicated, fun, warm and caring.  They understood the bond of being a survivor or the loved one a survivor.  They really were like family to me. 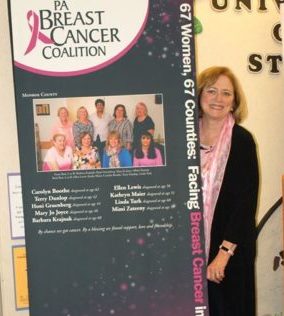 Was the PA Breast Cancer Coalition Part of your Journey?

As I mentioned, after the first conference in 1999, our support group hosted the 67 Women, 67 Counties: Facing Breast Cancer in Pennsylvania photo exhibit. We invited our representative, health care providers, survivors, the high school band, and held the event at the mall.  It was well attended, and I was so excited to be involved in organizing it, that I became Monroe County Captain of the PBCC.  Over the years we hosted two more events in 2007 and 2019.  I attended many more conferences, met many more inspiring men and women, saw advances in treatment, care and most of all felt empowered to make a difference.   Each year Pat had another cause and each year I saw the results of her efforts, along with all the people she inspires.

You were a tireless adovcate for Senate Bill 595, now Act 52, meeting with lawmakers and sharing the importance of the legislation. Governor Wolf signed it into law in July! Why do you feel so passionate about this new law?

Being a survivor, you spend a great deal of unproductive time, waiting for the other shoe to drop.  Those yearly mammograms are reassuring but often for women with dense breasts or a strong history of breast cancer, the mammograms are not enough.  When Pat asked me to reach out to my senator, I was more than happy to do so.  Senator Mario Scavello was very receptive to listening to my story and I found it easy to encourage (and push a little) to get him to support and ultimately co-sponsor SB595.  Like many of us, the senator had friends and family who had breast cancer.  We shared photos of our granddaughters and spoke of what living with breast cancer is like and what we could do for our daughters and granddaughters.  When SB595 passed unanimously in the Senate and all the senators turned and clapped at us with the PBCC in galley, I was in tears.  We can unite to fight this disease for our daughters and granddaughters!

What is your message to newly diagnosed breast cancer survivors?

Take charge.  You are strong and can get through this.  Reward yourself after each treatment.  Make it a journey that you will get through.  Ask questions and if you are not sure, get a second opinion.  Take the meds they give you for chemo.  I was never sick and to this day still reward myself with a corned beef and pastrami on rye whenever I go for follow up visits.

What does the PBCC mission “finding a cure now… so our daughter don’t have to” mean to you?